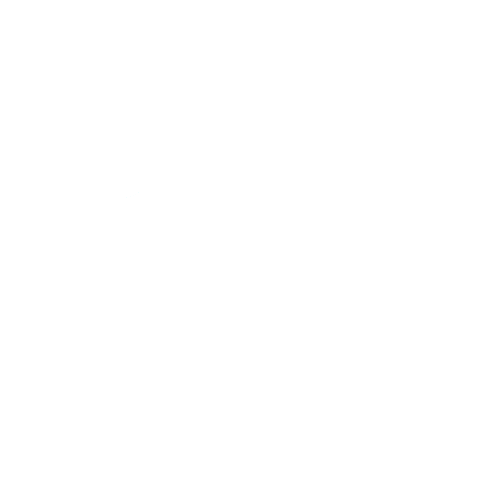 These sources are supplied as one inch plastic disks. With the exception of the alpha source, the small quantity of radioactive material is sealed in 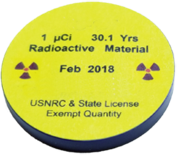 the plastic with epoxy to prevent leakage and contamination. The transmission window is sufficiently thin to transmit both beta and gamma emissions without undue absorption.

The alpha source is of open window construction with the source material bonded to the surface of a silver foil mounted in the recess of the plastic disc. This design yields excellent emission of alpha particles with window losses.

Radioisotope sources are available individually or packaged as sets of three, five, and eight in convenient storage boxes. These items are uncalibrated and of nominal activity to provide a safe, yet inexpensive supply of radioactive material for educational and commercial use. Individual sources for alpha, beta and gamma emissions are available in the following isotopes.

This set is used for determining the resolving time of GM Counters. It consists of three half discs, two of which contain 5 micro curies of Tl-204 plus a third half disc with no activity. The count-rate of each half disc plus the blank (to maintain constant geometry) is measured and then both active half discs are combined for a measurement with high count-rate. The counting loss may now be calculated by adding the rates from each half disc and comparing the result to the count-rate with both halves combined.

The RSS-3 contains 1 each Po-210, Sr-90 and Co-60 emitting a range of alpha, beta and gamma radiations. This set is ideal for demonstration and introductory nuclear labs covering basic characteristics of radiation. 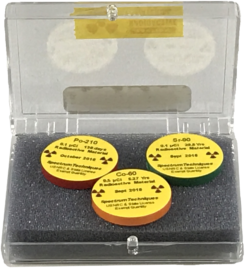 Containing 1 each Cs-137, Co-60, Sr-90, Tl-204 and Po-210, the RSS-5 provides a wide of alpha, beta and gamma emissions making it a popular choice for nuclear science instruction The set contains two beta emitters, two beta/gamma emitters and one alpha source for in-depth studies of radiation. 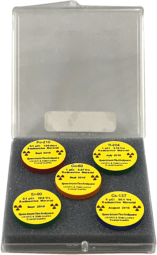 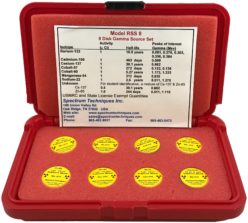 Due its relatively short half-life, the Po-210 alpha source must be replaced on a regular basis. Currently this is the only alpha emitting byproduct material available as a NRC Exempt Quantity which may be held without a radioactive material license. 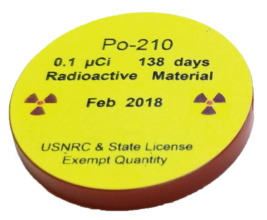